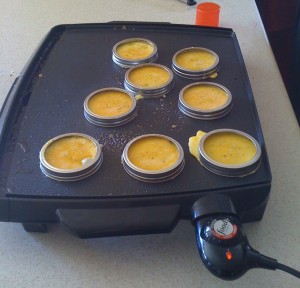 I decided to fix some homemade Bacon, Egg & Cheese Biscuits for lunch on Sunday. I’ve tried making them before, and everything goes well up until the ‘egg’ part. It’s just not very easy to eat these things with a bunch of scrambled eggs just piled loosely on the biscuit – they tend to fall out of the biscuit faster than you can scarf them down! I’ve tried using those special circular egg molds you put in your pan, but with a 12″ skillet, they never seemed to sit flat enough on the bottom, so when I poured the eggs in they would just run out the bottom under the mold and all over the pan – kinda defeats the purpose of the mold, you know?

We recently bought a large flat griddle during a fabulous Kohl’s sale (thank you PYP!), and we have been loving it (can’t believe we’ve gone this long without one)! We pulled it out and cooked our bacon, and then it was on to the eggs. But those little round egg molds were nowhere to be found, and I didn’t want a repeat of the Amazing Collapsing Biscuit Sandwich, so what’s a girl to do? Canning lids to the rescue!!!

We sprayed the inside of some wide-mouth jar rings with cooking spray, set them down on the skillet, and then poured the eggs inside. We let them cook until they were almost entirely set (just a little runny in the middle on top), gently popped the mold off, and then turned them over to finish cooking for another minute or two. Voilà! Just like the “eggs” on those other biscuit sandwiches that you might find under a pair of golden arches…Nicely cooked, the perfect size for the biscuits (I used canned dough ‘cuz I’m lazy), and no loose eggs falling all over the place!

The best part? We had two biscuits leftover. We stuck them in the freezer in a plastic zip-top baggie. Later that night, I pulled one out, wrapped it loosely in a paper towel and microwaved it for 60 seconds – fabulous! Just like my friend Jimmy Dean’s…(Okay, he’s not really my friend, but I still like his breakfast sandwiches anyway.)

[I’m probably the last person to figure out this little trick, right? You all probably had this figured out years ago…Oh well, just humor me, okay? 🙂 And yes, you could use fried eggs or poached eggs, which would solve the scambled-eggs-all-over-you mess, but I have a serious aversion to egg yolks that are not mixed together with the whites somehow, and I’m not talented enough to be able to pull off a poached egg, so scrambled it is!]